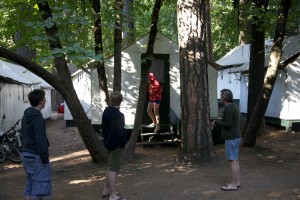 The one but last stop on our summer road trip was Yosemite. As we drew nearer the huge rocks started to dominate the landscape and the traffic slowed to accommodate the roads and the numbers of tourists stopping to take snaps. We struggled to make sense of the map but found Curry Village easily despite that. We had booked a tent, which was basically a wooden base and tent sides. Four beds were sardined inside. Light bulb. That was it. The shower block was a hosepipe away. Not bad. We wandered around to get an idea of the facilities – pool, canteen, bar, wifi lounge, enormous car park. Amazingly, after our eat-all-you-can alcohol-free buffet, we slept like a row of logs. After the all-you-can-eat breakfast we hired bikes and toured around the lower levels of the park. We were incredibly lucky to see a two-year old black bear within the first hour of exploring. We’d left the bikes and taken a trail that was blocked further up by a rockfall. Presumably the reason we were alone was that no one else was interested in a trail that was advertised as ending abruptly in a brick wall. Anyway, we were completely alone and turned a corner to find a bear thirty feet away. My husband immediately raised his gigantic lens to capture a great photo, I however was already about-turning everyone. At the time I didn’t know the bear was two and therefore living alone. All I knew was that he was small and therefore could have a mummy nearby, and getting between a mummy and her baby is bad news. In my panic to save my own babies I immediately fell over. Husband didn’t get the shot because I was shouting for him to retreat, a call echoed by my sons, and filling my daughter with terror. An adrenalin start. Next stop, after telling all our American fellow tourists we’d seen a bear and having them all say ‘We’ve never seen one in 25 years of coming’, was Lower Yosemite Falls. (‘Lower’ featured a lot because it was too hot to contemplate ‘higher’.) It is massive. We clambered down and found a pool to sit in, and one by one decided to scale the rocks leading to the bottom of the waterfall itself. Not the best idea. I got nearly to the base and started to panic because I couldn’t see any of the children. The boulders that looked large from the bridge down below were unbelievably huge close up. I was hot, red and breathless and had no choice but to go down, to climb up further was beyond my ability. About halfway back and at least 20 minutes later I found a son. Evidently the children were all safe and had been panicking about me and my husband. He ambled along some time later. Vowed to stay together next time. We had a swim in the pool, grateful to cool down. There are only so many eat-all-you-can meals you can eat, so we opted for the pizza place. It was idyllic actually. We sat in rocking chairs on the verandah of the wifi lounge with beer and food, read and chatted. Without trekking for hours there is plenty to do in the park, from floating down the river, to swimming in it, to riding. We did the water ones, ending our third day with a five o’clock swim in an icy river with a couple of other overheated families. Our last night we opted for the burger bar. I queued at the beer bar for the drinks. At the front I ordered two large glasses of Trout, a local beer. It came to $21 but I only had $20. Thank you to the man behind me in the queue for his dollar. Leaving Yosemite for San Francisco my daughter said, ‘I could have stayed there for two weeks.’