You must have heard of the butcher ordered to remove the Olympic rings from his window display of chops and ribs. Well, I had a similar run-in with the powers of the Olympic brand. Two years ago I approached my literary agent with an idea for a non-fiction book about young Olympians. I managed to recruit now-household names like Sam Oldham, Bronze Medallist 2012 in Gymnastics, Zoe Smith, plucky weightlifter who smashed the British Record at 2012, and Monday night’s Paralympian hero, Mickey Bushell, Gold Medallist in the T53 100m. Unfortunately, despite the glee with which my proposal was received, six months later there was no way through the web of sponsors unless I removed the words Olympic, Olympian, 2012 etc. I even used six degrees of separation to collar Seb Coe, who in fairness passed my email to the appropriate licensing manager, but rules are rules. Boo hiss!

Anyway, my enthusiasm for the Olympics didn’t suffer and I was one of the lucky ones who got tickets for both the Olympics and Paralympics. So, Monday morning we got up at 5.30, sped to London, parked at my aunty’s, picked up my nephew and were in our seats at the Athletics Stadium by 10.06. 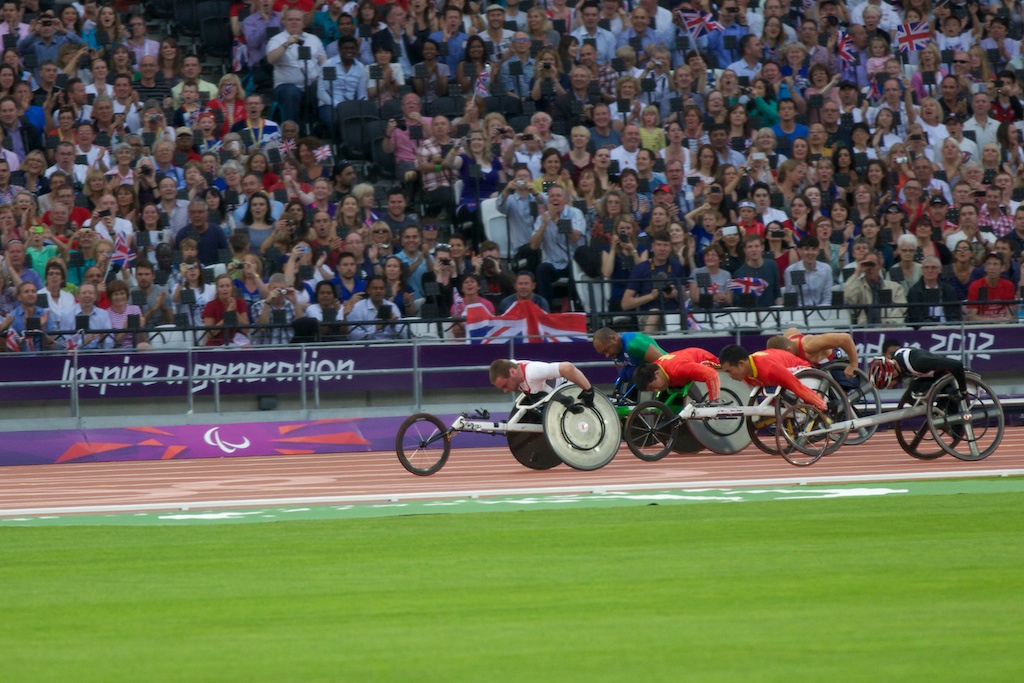 Before Mickey even wheeled onto the track I was welling up. It was a glorious day, the atmosphere (rightly much hyped) was convivial, even joyous, and we (five in all) were full of anticipation. He cruised to a win in the heat, so quick off the mark, so confident. We were on our feet from halfway, shrieking. When I say ‘we’ I mean the whole freaking (word borrowed from Scott Johnson of The Morning Stream) stand. Rows in front and behind congratulated each other (the Paralympic equivalent of ‘Peace be with you’ in church) as though we had somehow affected the result. The Discus competition was taking place to the left and the Long Jump in front of us. Every competitor got a roar as they approached their turn and a cheer if we calculated the distances to be worthy. We leant forwards to urge on rivals as they sprinted past, and stood for the anthems. The guided running for those with visual impairment was a feat of co-ordination and it was great to see that both partners received a medal. We shared Wine Gums. We shared commentary. All immensely heart-warming stuff.

The afternoon was boiling hot so we ate on the sloping grass of the riverbank before heading off to the Olympic Park to watch the big screen. Dressage, then ‘Darling of the Pool’ Ellie Simmonds. We watched her Medley with growing delight as everyone knew (from the commentary) that no matter how far behind she was as she turned into the last length she’d catch them with her freestyle. And she did. Absolutely fantastic. Widespread cheering from lawns and lawns of folk all sharing that moment.

My nephew headed off home to Rotherhithe and my mum arrived. A keen athlete, sprint and hurdles, she was at the 1948 Olympics, and in fact her relay pal, Jean Desforges (who later married Ron Pickering the commentator), ran in the 1952 Games. Mum has been fit all her life and can still run at the age of 87. I knew she was going to love the stadium and I was right. I’d filled her in on Mickey’s heat, and his story, so she was ready for the final. And so was Mickey. He streaked ahead. His final position was never in any doubt. If we shrieked earlier, this time, from Row 8, I reckon he could hear us. Bellowing, we were. I loved it. I wanted to run onto the track and tell him that he was a marvel, but I cried instead. And so did my mum.

Our attention was held for much of the rest of the evening by the high jumpers, grazing bars from a hop on their one leg. It was a great competition, punctuated by Victory Ceremonies, and more track racing. Mickey came back into the arena to receive his Gold Medal. The camera zoomed in on him and he didn’t blub, which would have been out of keeping with an athlete known as ‘The Beast’, he just looked cool and collected. I can’t imagine how his mum and dad and his family felt, because I have only a tenuous connection with him and I was overwhelmed. Thanks, Mickey. Great day! 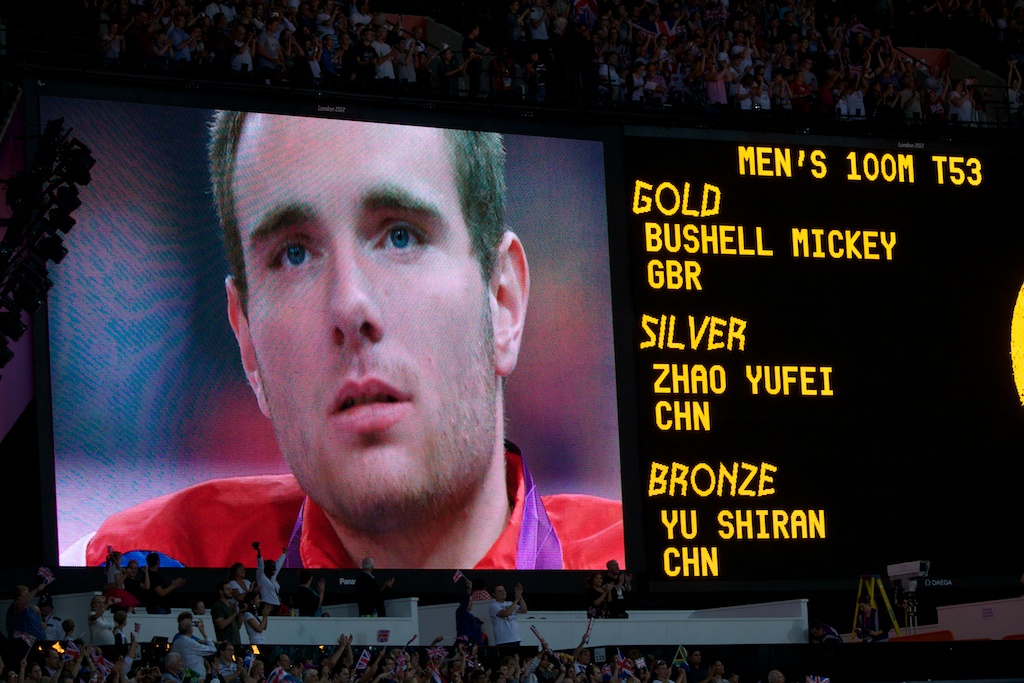 I enjoyed my day at the Olympics too. We watched the semi-final women’s hockey between the Kiwis and the Netherlanders and a session on the track including a 100m with the Usain Bolt. The hockey was full of passion, lots of goals and a penalty session to decide the finalists. We were at the goal end so had excellent vision of the five attempts to score by each side. Thrilling stuff.

Both events went, as far as I could tell, swimmingly. Transport, food, loos, seats: all fine. However, the thing you can’t package or sell, or dictate, is the feeling of being there. And for me, the Paralympics was a bit like going to the Proms, and the Olympics was more like the Opera. On the way home from the Paralympics we chatted to strangers on the tube. Doesn’t that say something.

p.s. My neighbour’s son has Cerebral Palsy and uses a wheelchair. He is 8 years old and football mad. He went to watch the Dressage and was bowled over. He rides for therapy, but had never thought of it as a sport. Tick!